Massive Attack’s Collected should be prescribed to everyone who uses the train line between Southend Victoria and London Liverpool Street. The duo’s trip-hop sound will sedate commuters to what is medically known as the ‘cooler than a God damn cucumber’ level, so they’ll be able to cope better when their train is inevitably delayed or cancelled.

Collected is my musical salvation, and it keeps me ‘Safe From Harm’ on my daily commute. If you’re not feeling better by the time you reach second track ‘Karmacoma’, then (no offence) you’re beyond help mate.

I’ve missed two gigs this week because last week’s food poisoning might actually be something a bit more serious. Rather than get sad about it though, I put Jeff Buckley’s Grace on and…got a bit sad about it whilst listening to a seminal 90’s record.

I really want everything to go back to normal, and the best way to do that is to blindly carry on typing these blogs and listening to more seminal 90s records. If anyone’s got any listening suggestions, fire them my way.

Can’t really begin this post without acknowledging that I haven’t written a blog for a while.

Three weeks ago I was in a bit of a dire situation with my ulcerative colitis and it was affecting everything (even though I carried on pretending everything was fine). I’m finally feeling better (thank you prescription drugs) and I’ve been making the most of this bright spell by meeting new people and talking a lot of talk about my favourite new music, so I’m not going to apologise for my tardiness.

I keep finding myself in situations where I genuinely have to pinch myself because I feel so overwhelmed by how bloody nice people can be. I watched my friend Hollie get the surprise of her life at her birthday/surprise engagement party last week, and for the first time in two years, watching people who genuinely love each other share that love didn’t make me want to tear my own heart out. It was so bloody nice and it’s turned me a bit soft.

Then there’s me new mate Kelly who I’ve only known for two weeks, but through a mutual love of music and quoting Bridget Jones we’ve managed to become each others go-to-girls for gigs.

Then there’s all the great bands I’ve seen and spoken to over the last few weeks. I’ve said it before, but watching and talking to the people who make the music that shapes your days really is an absolute eye-opening joy.

I’m going to stop bleedin’ gloating now and leave you with Semisonic’s ‘Secret Smile’. I remember hearing this on the radio in my cousin’s car when I was eight years old. Feels like a smug and relevant little tune to share on a Sunday…

I visited the David Bowie mural in Brixton this weekend and it’s left me a bit choked.

My friend Rachel and I spent some time reading the messages left by fans and amidst the lyrics and expressions of love and sadness, there was a simple message that warmed my little walnut heart: “Thank you for existing”. 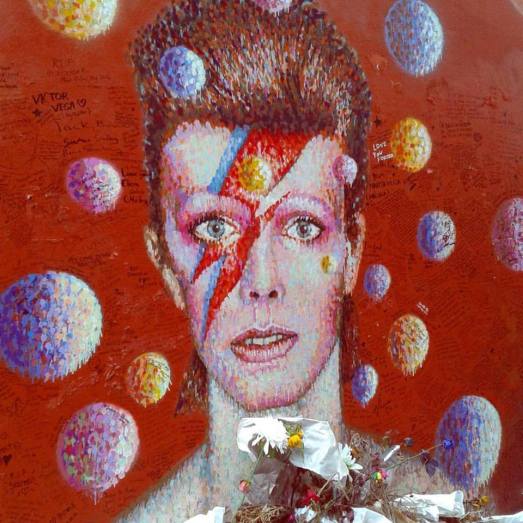 English teachers tell you to avoid using the word ‘nice’ but sometimes it’s the perfect word to describe acts of kindness. I think this message is ‘nice’ because it rings true whether you’re as extraordinarily well known as David Bowie, or if you’re only known to a small but important minority of people.

Your existence might be small, but it’s powerful and it matters. Sometimes it takes something as shocking and sad as the death of David Bowie to remind you of that.

I’ll be honest with you guys, whilst my Bestival review made it sound like I had a top notch time last weekend, I actually spent a lot of time wandering around on my own (sometimes in the pissing rain) feeling a bit low.

I spent a lot of time watching some of my favourite bands wondering why I still haven’t learned to play an instrument, and consequently why I’m still not in a fucking band.

I also spent a lot of time lying in my tent with some serious ulcerative colitis gut aches, wondering why I didn’t ask my doctor for a dose of steroids when I was at my routine hospital appointment last week.

I didn’t really tell my friends about any of this, but I’m pretty sure they figured it out. They’re a perceptive bunch who would probably just try to help me if I actually gave them the slightest chance.

I suppose I could’ve brought the steroids bit up. Festivals are the most appropriate place to talk about drugs so I could’ve indulged in some banter with the chemical loving Geordies who camped next to us, but alas, another opportunity missed.

I also didn’t want to be a bloody miser, so it was safer for me to wander off and see all my favourite bands whilst they did the same. It was easy to meet up after and chat, so I don’t think anyone got too offended by my absence (if you did, soz mate).

I also wasted a lot of time wondering what other people thought of me as I trudged about with no eyeliner on, and last night’s glitter smeared across my face. When I was standing alone in my dungarees and sunglasses rocking my shabby chic blonde bob watching Wolf Alice for the sixth time, people probably made the mistake of thinking I was at best ‘cool’ and at worst ‘brave’ for standing on my own.

I am optimistic in my low moments though. I had a bit of a Mark Corrigan Peep Show moment when a nice man spoke to me in the crowd waiting for Wolf Alice. Don’t panic, I didn’t tell him he was “the one” or ask him to marry me, I just told him how much I loved Wolf Alice and I thought his job as a festival technician sounded cool. Then Ellie Rowsell came on stage and I lost all interest in conversation.

The optimism is there though because a) it’s genetic, my Mum is a chronic optimist, and b) music always makes me feel better. The right song rarely fails to help me out of whatever self-indulgent hole I’ve crawled in to. I am a creature of habit, and hearing my favourite songs again and again rarely bores me.

I love music (and most musicians) with an adolescent intensity. I’m waaaaay past my teens, but I still feel the same urgency when I hear a new band that I originally felt when I first discovered there was an alternative music chart (which was embarrassingly late, but I’ll save that for another blog).

Bestival 2016 had a lot of flaws (I heard a rumour Prince was supposed to headline Sunday, which is why the line-up/organisation was screwed) but it reminded me that it’s okay to feel low, even if everyone else is feeling high. What makes it alright is the comfort I took from Robert Smith’s voice, Wolf Alice’s lyrics, and VANT’s topless frontman.

I am having the time of my life, but I’m also having a hard time trying to do it when my faulty body constantly keeps trying to stop me from having one.

ANYWAY. The Cure reaffirmed my ability to fall madly in love with music again, so below is a song about the undying nature of that love…

Side note: Turns out, if I’d just checked my emails one last time before I left…I could’ve met up with at least two people at the same stages across the weekend. It’s like I bring it on myself, honestly…

On a scale of 1 to “bursting in to tears in front of your Dad with a mouthful of half chewed new potatoes” this week’s definitely been at the latter end of the emotional scale.

Even those with the loudest laughs and the most satisfying smiles still have the occasional personal malfunction.

To top it all off, The Maccabees decided to call it a day. *chews the rest of the new potatoes before crying again*

I remember the first time I heard ‘Love You Better’ and ‘No Kind Words’ at The Pink Toothbrush in 2009. After a lot of googling, I finally discovered The Maccabees were responsible for these magnetic sounds.

Amber Bain aka The Japanese House

What a week. What a weekend. It was all so lovely, my heart’s turned to marshmallow.

Oslo on Tuesday to see The Joy Formidable, Dingwalls on Thursday to see The Japanese House, Rayleigh Mill on Friday for Hate Vessel, and The Finsbury on Saturday for COURTS.

There was a serious lack of sleep in between all of the above, but it’s hard to lament when it was all so bleedin’ brilliant.

I’m currently in Brighton, hung-over, celebrating my best friend’s birthday; too consumed in my own drunken memories to notice it’s the day of the year where love is supposed to triumph etc, etc.

My friends & I were a triumph on the dance floor last night. That’s all that matters.

On a slightly unrelated note, Band Of Skulls have been on my mind since they announced they were playing The Great Escape Festival a few weeks ago. I’ve re-listened to Baby Darling Dollface Honey, Sweet Sour & Himalayan this week, and ‘Hometowns’ has lodged itself comfortably in my memory. I usually prefer the loud to the quiet, but this one struck a chord, so I thought I’d share…