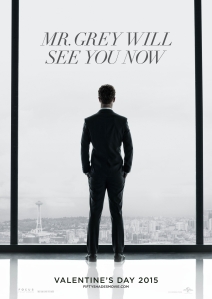 To mark the release of the infamous film adaptation of Fifty Shades of Grey, I have re-posted a blog I wrote about my experience of reading E.L James’ novel. I’ve updated the post to include the extra paragraph that featured in the version of the blog I submitted to Belle Jar (and because for a literature student, my grammar is sometimes appalling.)

I will probably crack and go and see the film, because: JAMIE DORNAN. I just want it on record that I really wish everything about Fifty Shades was fifty times better. Here’s my updated rant:

I would like to begin this post by stating that naturally, I admire anyone who has taken the time and energy to produce a novel. I appreciate that it takes an immense amount of courage and bravery to write and publish your own work. It’s something I hope to achieve in the future and the idea of someone picking up my work and ripping it to shreds, breaks my tiny walnut heart. I am about to criticise E.L James erotic novel Fifty Shades of Grey. I now sound like a complete hypocrite (especially as I didn’t finish the book, I only read 178 pages) but rather than just shouting ‘I HATE IT! I HATE IT! I HATE IT!’ I thought I’d explain why I couldn’t finish reading it.

You might be thinking ‘Ugh, Bob is clearly just over-sensitive/easily offended and should get over this mildly pornographic novel’. If you think that, then you clearly don’t know me very well. I am not offended by graphic descriptions of sex in literature – it’s 50% of the reason I love books so much. You can be as filthy as you like in the most intelligent of ways! The library scene in Ian McEwan’s Atonement gives me tingles, Emilé Zola’s Germinal makes me do a sexy shudder, and Angela Carter’s The Bloody Chamber is still rocking my world. I was hoping Fifty Shades would provoke a similar reaction.

I’d spoken about the book with friends, and my old school teachers. They had all come to a similar conclusion: that it was terribly written soft porn. Some of them liked it, some of them dismissed it. I wanted to read it out of curiosity, but didn’t want to actually pay for it (just in case it really was complete trash.) Fortunately, I was in a charity shop one day and I saw it on the shelf at the tempting price of 75p. I handed over my pennies to the smirking, yet sympathetic cashier, and hastily left the shop as if I’d just committed a terrible crime. I started reading the next day, and I was generally impressed with the way E.L James established the characters of the young literature student Anastasia Steele, and the intimidating businessman Christian Grey. (Obviously, with the turn of every page I was waiting for some sexy bits, but that didn’t happen until about page 100.) I continued reading and started to become aggravated with James’ persistent repetition of specific phrases. The words ‘holy hell’ appeared before, during, and after every awkward, sex-free encounter Anastasia had with Christian. She also reused the phrase ‘damn my clumsiness!’ too many times to count. I wanted to scream in to the page: ‘I GET IT! SHE’S CLUMSY!’ If James cut half of these phrases the novel would flow smoothly. However, this isn’t what disappointed me the most…

Before they engage in sexual activities, Christian Grey busts out a hefty, sexy contract for Anastasia’s consideration. It states that Christian wants to be ‘the dominant’ and control all aspects of Anastasia’s sex life, therefore making her ‘the submissive’. There’s a very important bit about consent, discretion, physical well-being, and personal limits, but you get the gist, right? Well, the amount of pages James dedicates to the explanation of this ‘contract’ is one of the most excessive, boring things I‘ve ever had to read (and I’ve read Middlemarch.) Her repetition of ‘the dominant’ and the ‘submissive’, nearly caused me to rip the book to shreds. I don’t ever want to see those words in print again (…oops.) However, this still isn’t what disappointed me the most…

The character of Christian Grey is cringe-worthy. From the reviews I’d read and the facebook statuses I’d seen, I assumed he was a Demi-God. Quite frankly, I’m not turned on by his helicopter (the one he physically flies, not the penis trick), his entrepreneurial success, or fundamentally anything he does or says. I don’t like the way he keeps talking to Anastasia’s vagina about its ‘intoxicating smell’, and I especially hate the way he calls her ‘baby’. Don’t even get me started on his ‘sexy’ Red Room (weird/inappropriate allusion to Bluebeard and Jane Eyre there? Another reason why the book infuriates me!) I’m surprised Anastasia didn’t out-right laugh in his face when Christian showed it to her, gave her a sexy contract and said ‘think about it, yeah babe?’ (THAT’S BASICALLY WHAT HE DOES!) However, this still isn’t what disappointed me the most…

I cannot handle the way Anastasia Steele does not call her vagina what it is: A VAGINA! She refers to it as ‘my sex’. James will write graphically about oral and penetrative sex, but she refuses to use the word ‘vagina’? She doesn’t even use a playful word like ‘p***y’, or something blunt like ‘c**t’, she constantly refers to it as ‘my sex’. Perhaps she thinks this displays Anastasia’s consent and ownership over her body? Perhaps it is, actually sexy? Over 70 million copies of the book have been sold, which means other people seem to really enjoy this kind of thing. I appear to be alone in my loathing of this newly coined, vaginal terminology. However, this still isn’t what disappointed me the most…

Finally, I am about to reveal the real reason that I had to stop reading Fifty Shades of Grey. The first time E.L James referenced Thomas Hardy’s tragic nineteenth-century novel, Tess of the D’Urbervilles, I knew I was destined not to reach the finish line. It is Anastasia Steele’s favourite book, it also happens to be one of mine. James uses the novel’s title as a motif; a classic reference that could potentially give her novel a sturdy, credible backbone. I am about to smash that backbone right up. For those who haven’t read Hardy’s novel, seventeen year old Tess Derbyfield is raped by her ‘cousin’ Alec D’Urberville. There are many literary critics who have tried to dismiss this rape by arguing that Tess is a passive, but consenting sexual partner. To summarise: their argument is BULLS**T. It is horrifically clear that Tess does NOT consent to Alec’s advances. She is a seventeen year old girl, completely unaware of how to defend herself in a society where she is deemed a sinner, even though she is the victim of horrific sexual harassment. Tess’s appeal to her Mother after she has been raped surely proves that she was not an active, consensual partner in her encounter with Alec D’Urberville:

‘How could I be expected to know? I was a child when I left this house four months ago. Why didn’t you tell me there was danger in men-folk? Why didn’t you warn me?’

I feel that James uses references to Hardy’s novel incorrectly, and as poor justification for male dominance and female submission. How does Tess’ story compare to Anastasia’s story? Anastasia is ‘warned’ by Christian’s ‘contract’ about what he would like to do to her. She wholeheartedly admits that she desires him in every way. Not once does Tess admit desire or consent to sex with Alec. Tess is raped, Anastasia is not. I find it baffling that E.L James thought this would be a valid reference for her novel. Even in terms of ‘the dominant’ and ‘the submissive’, it is still a completely misused reference. This is why I had to stop reading Fifty Shades of Grey.

I am open to the idea that James’ novel isn’t supposed to be taken seriously (it is fan fiction based on the characters of Bella Swan and Edward Cullen from the super successful Twilight series.) I like to think that readers are potentially more interested in the emotional relationship between Anna and Christian, than the sexual relationship, but I find it disappointing that such a badly written novel with such inappropriate references, has gained such popularity. If like Oscar Wilde famously said, all art is ‘useless’, then Fifty Shades is harmless, but if all art is ‘propaganda’ like George Orwell suggested; what kind of message is James trying to convey? She is exploring elements of female sexuality, which is commendable, but her characters are so unsatisfying (and highly unrealistic – I don’t know any women who managed to climax whilst losing their virginity), I could only read 5-10 pages at a time before the disappointment turned to despair. I’m genuinely confused as to what kind of message this novel sends to women and men, about the role of sex in a relationship? The only thing I can praise is the discussion about consent, but even that was portrayed in the unrealistic medium of a ‘contract’.

I fully accept that it’s not the best idea to judge a book by its first 100 pages (178 to be precise). However, I have researched the plot online and can happily say that I would‘ve gained nothing but another rage-induced headache from continued reading. I also fully accept that I have repeated the phrase ‘However, this still isn’t what disappointed me the most…’ four times, thus committing the same literary sin as E.L. James. Oh well, I doubt she will take offence at this blog post for the following reasons: