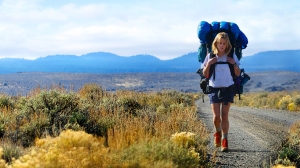 Wild is the film adaptation of Cheryl Strayed’s memoir Wild: From Lost to Found on the Pacific Crest Trail. Cheryl solo trekked 1,100 miles after losing her mother to cancer, the breakdown of her marriage and her subsequent addiction to heroin. Reese Witherspoon’s skill, Laura Dern’s optimism, and Jean-Marc Vallée’s excellently edited flashback scenes show Cheryl at the brightest, and darkest moments of her life.

Vallée does not shy away from the grim realities Cheryl faced whilst undertaking such a perilous journey; having her toes reduced to bloody stumps, all of her food resembling ‘cold mush’, running out of water, and sleeping in the snow; all are graphically addressed within the film’s narrative. He also pays particular attention to Strayed’s encounters with men during her journey, which range from kind and reassuring, to unbearably tense and frightening. It is Vallée’s quiet, sophisticated direction that makes this aspect of the film so poignant. Fortunately, Vallée offsets these sinister moments with dark comedy: Strayed’s inner monologue includes persistent use of the word ‘fuck’.

Wild is a film for lovers of walking, the wilderness and women. It is a film designed to encourage you to embrace the good and the bad, the traumatic and the revelatory, and to feel as much as you physically can. It’s reassuring to see a film in which someone manages to pull themselves back from the brink of self-destruction. It’s even more reassuring when said film is based on truth.