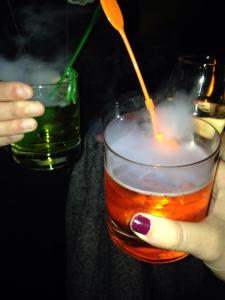 ‘I solemnly swear that we are up to no good’

When the Warner Brothers Harry Potter Studio Tour opened in 2012, like thousands of other muggles; I was desperate to go. I got my chance to visit in February 2013, and it was every bit as magical as I expected it to be. Visiting the Harry Potter Studio Tour is a privilege in itself; but visiting it on a press night, with complimentary drinks and snacks, redefines the word privilege. My journalist friend Rachel allowed me to share this opportunity with her last night. We were there to experience the new ‘Dark Arts’ exhibit.

The experience was all the more exciting for me, as I’ve recently read Harry Potter and the Philosopher’s Stone for my Open University course in Children’s Literature. Reading J.K Rowling’s first book made my little, walnut heart swell with nostalgic glee, so re-visiting the Warner Brothers Tour became an extra-emotional experience (the free drink probably helped with that too).

Rachel & I were greeted with a glass of complimentary champagne, the sight of Location, Location, Location’s Kirsty Alsopp; and then took our seats in the screening room. We chatted excitedly, even though we knew what to expect as we have both been on the tour before (this was Rachel’s fourth time; try not to hate her). Mid-conversation, Simon Pegg walked in to the room and I immediately lost my trail of thought. I tried to play it cool, but shrank in surprise/embarrassment at his appearance, and promptly text my Mum the news instead. The lights went down, the introductory film was screened and then we were let in to The Great Hall (a novelty that will never wear off).

Along with the other guests, Rachel & I were allowed to roam freely around the sets, taking pictures and enjoying the magical atmosphere. Like moths to a flame (or perhaps more accurately, Harry Potter’s eyes to the Golden Snitch); Rachel & I were drawn to the complimentary bar, which was full of green and orange drinks, smoking like they’d just been poured from a cauldron. Once we discovered that the smoke was actually dry ice, and the concoction was prosecco-based, not poly-juice potion; we knocked them back like Pumpkin juice. Needless to say, this resulted in us being really quite inebriated and therefore laughing like first-years whenever something even remotely exciting/funny happened.

We admired the new Dark Arts exhibit, which included the life-size animatronic of Bathilda Bagshot, suspended above a table that seated Lord Voldemort, The Malfoys, Bellatrix Lestrange and Severus Snape. There was also a full scale model of Nagini on the table, hissing away at Bathilda. Rachel & I spent a considerable amount of time circling this exhibit; firstly, pursuing the man who was handling a live python, who turned out to be the real-life Nagini’s owner, and general go-to-guy for Snakes in the Harry Potter films, and secondly; taking full advantage of the bar.

As we circled, we spotted more celebrities. Amanda Holden was there with her children, taking photographs and talking to journalists, and Jake Wood (who is better known as Max Branning from Eastenders) was also there with his family. Mary Berry was also present, but unfortunately, we were too busy indulging in the complimentary snacks to stumble across her; these included mini beef burgers, mozzarella balls, spicy prawns and scotch quail’s eggs. Rachel was also being stalked by one of the numerous Death Eaters, so we decided to break away from the bar, and venture outside to see the familiar sights of Number 4, Privet Drive, Godric’s Hollow, and The Knight Bus.

We continued walking through, encountering Buckbeak and Aragog, amongst hundreds of other fascinating pieces of Harry Potter memorabilia. The tour ended with the spectacular model of Hogwarts; lit-up like a dream, and so intricately detailed, you need at least four hours to inspect it before you look at anything else. We were offered a sobering, complimentary coffee, took our last look at the magnificent turrets, and made our way out through the gift shop, to receive our gift bag of Weasley exploding bonbons, and a notebook bearing the Slytherin crest. Rachel & I said our goodbyes at Euston, and boarded separate trains’ home, both quoting the same line in our prosecco-filled heads: ‘I’m not going home, not really’.

Today, I am drafting up a plan for my University assignment, which will be a discussion about the relationship between instruction and delight in Harry Potter and the Philospher’s Stone. I feel like last night’s delightful experience has provided me with the right instructions to pen this essay; now to stop procrastinating/boasting, and actually do some work. ‘Mischief Managed’.

Disclaimer: I should probably just rename this blog ‘the amazing events my friend Rachel takes me to as her +1’.